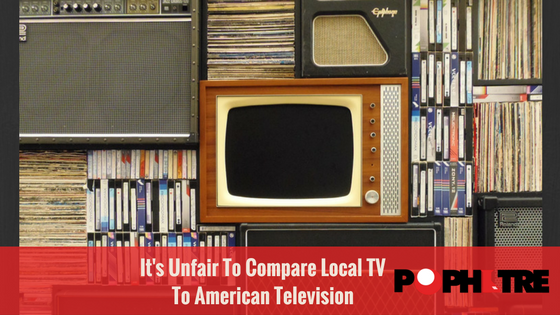 Since last year, I’ve written about the few bright spots in our gloomy local TV. I’ve given praise to the first half of Kalye Serye and On The Wings Of Love. I’ve even defended its dubbing habit. Does this make me seem like a local TV apologist? I don’t consider myself as that. I want to enjoy and evaluate local TV based on its own merits. To judge it on what it is and not what it isn’t. Comparing local TV to American television is unfair, especially when you consider the systems running in each are entirely different. It’s like comparing your 13 year old brother barely grasping Algebra to your neighbor’s 26 year old marketing professional son. Or, comparing a lvl 5 Nidoran♂ to a lvl 65 Charizard.

The Golden Age of American Television

If you’re closely monitoring American television, you may have heard that US TV is at its 2nd Golden Age. Production and consumption of American television is at its best and highest right now.People are even saying we’re at the peak right now, since 2014. How do the Americans know that they’re at their peak? If you clicked on the link, FX Network CEO John Landgraf presented that there are 419 original scripted shows set to be released this year alone, spread across broadcasting, cable and streaming video-on-demand services. Confused with what that means? Let’s breakdown all that mumbo-jumbo:

That’s a lot of TV to go around! But just like Rome, this Golden Age of American TV didn’t happen overnight. It took three or four decades for US TV to find its groove back after its first Golden Age. One of my favorite TV critics, Andy Greenwald, explains it wonderfully in an interview how circumstances in Hollywood fueled the early creation of TV’s Golden Age. The success of SVODs and the introduction of binge-watching further expanded the sandbox TV could play in, allowing for it to exponentially learn and grow. Sure for every The Wire, Breaking Bad and Game of Thrones, you had three or four crappy shows. But that was the only way for American television to gain success. They needed to invest, innovate and take risks.

Moreover, for cable and SVOD services, audience rating wasn’t the top metric to measure a show’s success. Quality came first. Current classics like Breaking Bad and Game of Thrones were given breathing room to flourish. These risks eventually paid off as these two shows’ audiences grew season after season.

Philippine Television, the Upside Down

The current landscape of local TV isn’t conducive to innovation. First off, local TV is basically shared by three major broadcasting networks: ABS-CBN, GMA and TV5. Between the three, only 36 original scripted series are to be aired this year. Second, instead of producing more shows to fill in their time slots, local networks have the habit of buying and dubbing foreign shows.  I’ve already mentioned the merits of having these dubbed foreign shows in a separate post, but I can still argue that these shows take airtime from what could have been other locally-produced shows. Thirdly, TV shows are merely vehicles to showcase and sell network artists. It’s more important to write in scenes that build the main talent or love team rather than build the story.  Lastly, the production and airing schedule in the local scene is much much different. A typical primetime local TV show would run for three months every weekday. Take On The Wings Of Love as an example. It had 145 episodes in its seven-month run. That’s seven seasons (read: years) of US TV squeezed into seven months. This matters because the pace and pressure the production and creative staff experience on a daily basis isn’t at all conducive for creativity.

It might seem that I inevitably compared both industries but you can get a sense how they’re miles apart. It’s not as simple as telling local TV networks to just “git gud” to reach the level of American television. As it stands, the local TV landscape lacks the necessary ingredients (investment, risk-taking and creative freedom) to deliver our version of the Golden Age. Moreover, asking for TV like how Americans do it is basically requesting the local networks to restructure how they do their business.

And what would be a compelling reason for them to change their ways when the two giants ABS-CBN and GMA have posted growth over the last year? Things will stay the same unless some new innovation forces itself in industry.

So are we forever sentenced to have mediocre content on our local broadcast channels?

Last June, it was announced that the local indie movie hit On The Job will get a sequel mini-series to be released exclusively on HOOQ late this year. During the same month, telco giant, Globe, announced that they will try their hand at producing original content with the launch of Globe Studios. These two announcements give me hope as both HOOQ and Globe Studios are new entrants in producing original content. Both are upstarts that want to create a big splash in the entertainment industry. I’m betting on these two in delivering original scripted content that can eventually influence the TV networks.

It has happened before and could happen again. Netflix was just a video-on-demand streaming service for movies and TV series until they finally decided to make their own content. They were lucky enough to sign great on-screen and off-screen talent making their two original series, House Of Cards and Orange Is The New Black, such critical and audience hits. Thus changing how broadcasting and cable networks do their business.

While we wait for new developments in the landscape, it wouldn’t hurt if we continue to be critical of what we are being currently offered. Call out GMA’s inconsistency in offering an awfully produced and performed Alyas Robinhood when they can, at the same time, produce a quality show in Encantadia. Call out ABS-CBN for their newest re-skinned and re-casted sexy drama in Magpahanggang Wakas. It’s the nth time we’ve seen a sexy poverty-stricken female lead get married to a wealthy man (and a misuse of Arci Munoz if I may add). These are reasonable critiques that these networks can resolve.

I consider myself as a local TV optimist. I still believe that local TV can be better. It may take time, but we’ll eventually get our own Golden Age.