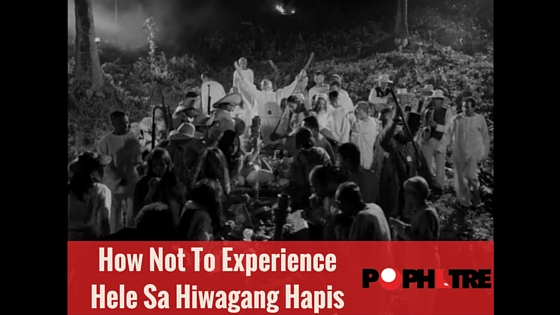 I have to start with this: watching Hele Sa Hiwagang Hapis yesterday was my first time to ever view a Lav Diaz film. I knew nothing of Lav Diaz’s style nor his previous works. All I knew was that he’s an internationally-respected director known for excessively long films. That’s it. Hele  wasn’t even in my consciousness before a week ago, when I learned that John Lloyd Cruz was part of the film. Being a self-proclaimed Lloydieologist (yeah I’m coining this), I felt the urge to watch it. The man continues to challenge his talents, and you just have to respect that. An invite from my friends on Good Friday night was the last push I needed to watch the film.

Fast forward to Saturday night, and let’s just say I wasn’t satisfied with my experience. I left the theater with a slight dead leg from all the sitting and a head messed up by all the “why????”s I thought. Most prominently were “why did the movie take 8 hours???” and “why did we need to see Basilio (Sid Lucero) digging for 5 mins?”. Don’t get me wrong, I did see positives in the movie. There were scenes and shots that made sense to me (i.e. Simoun on the raft). And I liked the idea of the universe it’s set in: a Filipinas where the lines of history, fiction and superstition intersect. I could just imagine how much stories we can mine from the universe Diaz posited. However,these were just a tiny fraction of the 8 hours we spent. Maybe it also didn’t help that I was also disappointed by my first taste of Halal Guys? Here’s a short review:

While eating, I just couldn’t help the feeling that that was it. I eventually went online to find out why film critics were raving about it. In between the spoonfuls of mixed rice, diced tomatoes, onion, chicken and falafel were “huh?”s of disagreement.  I just could not see what they saw in the film. I gave up and just concluded that I’m just really basic when it comes to highbrow films.

John Lloyd Cruz in Hele Sa Hiwagang Hapis: Sold his role of Isagani well. Highlights include his street urchin under the bridge and eating sapsap scenes. Though his crying were suspiciously similar to his other films (see A Second Chance).                       — Four in a half stars

That night, I just couldn’t help the feeling that I was disappointed by Hele. I even ended up watching Jerrold Tarog’s Sana Dati on DVD to cleanse myself of the feeling of lugi. (A Sana Dati short review? Nah, I’ll just write another post on my thoughts on it.)

But Sana Dati wasn’t enough. Hele was still in my head. Perhaps having eight hours and five minutes staring at the black and white large screen was enough for the movie to burrow itself into my consciousness. I tried to sleep it off but it was still there. A breakfast of McDonald’s hotcakes wasn’t enough. There was just something fundamental in me that the film was protesting to. Through reading all the currently available pieces and watching a few cast and director interviews about the movie, I’ve come to realize that, maybe, I was ultimately unprepared experience the film.

In a press conference for the film that was reported by Rappler, iconic actor, Bernardo Bernardo said “Ang unang-unang masasabi ko, you learn that you don’t watch a Lav Diaz film. You experience a Lav Diaz film.”

And it is true. Hele Sa Hiwagang Hapis generally broke the conventions of what I thought a film should be that I just can’t consider it to be a movie anymore. It was meant to be an experience. It was written, shot and edited to be an experience.  And just like any life experience, you need to have some kind of preparation to grasp it fully.

So here I am writing this piece in the hopes of directing people to a better way of appreciating Hele Sa Hiwagang Hapis. Its imperative to guide people on how to properly experience it. This is after all, Diaz’s first film to be widely distributed locally. A lot of Filipinos would no doubt try watching it, like me. And may end up dissatisfied; like me. Or worse, reject this kind of artistry.

So here are my tips for people who are interested in watching Hele Sa Hiwagang Hapis:

1. The movie is a challenge but not a #HeleChallenge

To be honest, Hele is indeed a hard sell for the casual moviegoer. So to encourage some action from the audience to watch the film, Hele is currently marketed as the #HeleChallenge because of its long runtime. A film not for the faint of heart nor for people with small bladders. Like finishing the film alone will grant you some new world perspective. Well, a part of me fell for that. I remember joking while we had lunch before the movie that they should have “I Survived Hele Sa Hiwagang Hapis” shirts available after the movie. A proof my superficial greatness that I wear with pride.

I don’t know how to sell this movie to the public but marketing it as #HeleChallenge is kind of problematic. Turning the experience into a social media challenge can inhibit a viewer to enjoy the movie’s depths. Social Media Savvy Sam can just go in the theater and think, “if the #challenge is to withstand the movie for 8hrs 05mins, then maybe I could just skim through it.”

Hele is a challenge because it doesn’t have the “comforts” of a mainstream film. It tries to fight against what you believe are the norms of cinema. The movie doesn’t have color, nor narration, nor background music,nor special effects. Ninety-six percent (of course a rough estimate) was shot with a static camera (you know that a scene is of importance when the camera does move). It’s a movie about a revolution but the revolution happens off-screen. Funny how this opened alongside Batman v Superman.

2. Refrain from using your left brain

This tip goes back to my experience of leaving the theater having a bajillion questions left unanswered. I remember asking my friend what was the reasoning behind the back and forth between the journeys of the two parties. Or the significance of each scene in the movie in building the finale.

Living in the information and technology age has framed our minds to process things in a problem-solution mindset. That things follow certain logic and are meant to be explained. But in truth, there are some things that are better felt than explained or rationalized.

Expecting things to be neatly explained or having rhyme or reason in Hele is a stretch. Do remember that history, mythology and fiction already coexist in this universe. Bonifacio’s death and whereabouts is as strong a myth as the belief of Bernardo Carpio’s as the ultimate weapon against the Spaniards. In other words, logic doesn’t fit that much in Hele. Instead of wondering about plot consistency of Hele, I’d like you to suspend disbelief and examine what it will make you feel instead.

3. (If you’re a millennial) Leave your millennial-iness at the door

In the middle of hour 1 and 2, having a sense of the movie’s pace, one of my friends and I discussed what else we could have done instead of watching the movie. Apparently, we could have roughly reached Dubai by the time the film finished. I also thought how in 8 hours I could have played The Division and powerleveled my character to level 30, or how I could have binge-watch a substantial chunck of Daredevil season 2.

During hour 6 and 7, I discussed with another friend of mine how the film is so inefficient. How so much of the movie can be trimmed so it can fit the two-hour runtime norm. How I’d basically cut Ely Buendia and his singing, Basilio’s digging, and Gregoria De Jesus’s party walking aimlessly through the dense jungle.

Lav Diaz in the same press conference mentioned above said how the 8 hours will easily pass by, especially when you immerse yourself in the film. Boy, did Lav overestimated the attention span of audiences. But somehow, of course in hindsight, I kind of understand what Diaz said. Part of the audience’s immersion into this histo-mythi-fictional world is to also feel its pace. 19th century Filipinas was far from the pace we’re used to. It adds to the authenticity (having a still camera placed at a distance) of its voyeurism wherein the audience must patiently waits for the subjects. The characters are not there to perform for an audience. Let the film take its time and your patience will be rewarded by a different experience.

(FUN FACT: I originally intended to name this piece as “How My 21st Century Brain Could Not Understand Hele Sa Hiwagang Hapis“)

So that’s it. Have fun with Hele!