Nenz and Euge discuss last Saturday’s Jadine In Love concert, their hopes for OTWOL’s finale and listener questions and reactions.

Feel free to drop any comments, suggestions, or topics in our comment section below 🙂

Here’s All About OTWOL episode 04!

Nenz and Euge discuss their favorite OTWOL supporting characters plus their observations from this week and listener questions and reactions.

Who’s your favorite supporting character? Share your answer in our comments section!

Don’t forget to subscribe to our soundcloud page for updates!

If you want to listen to the previous episodes of All About OTWOL click this link. 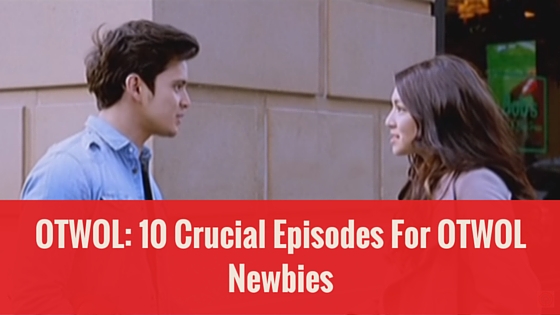 On The Wings Of Love is about to end in a week’s time. If you have any friends that want to get into the show before its finale, Nenz took note of the 10 (out of all 138 episodes) crucial episodes to put any OTWOL newbie up to speed.

You can watch all of OTWOL’s episodes via iWanTV for free. All you need to do is to register.

Note: We know that choosing only 10 from the current 138 episodes would be difficult, so we prioritized the episodes that will help newbies understand Clark and Leah’s story as well as their personalities and values. Again, this isn’t the BEST or MOST KILIG episodes of OTWOL. These episodes were chosen to help newbies follow the current story.

If you have any builds or comments, feel free to comment below!

Welcome to the ONE AND ONLY OTWOL podcast on the internet (so far), it’s ALL ABOUT OTWOL episode 03!

In the spirit of fairness, Nenz and Euge discuss the things that frustrate them about OTWOL right now.  Plus their thoughts on this week’s episodes and their answers to your questions.

If you have any questions or topics you want us to discuss, give us a comment on FB, Twitter or soundcloud or send us an email at popphiltre@gmail.com

Nenz and Euge discuss this week’s episodes, their reasons for watching OTWOL and some listener questions.

If you have any comments, suggestions, questions or topics you want them to discuss, feel free to email, comment on facebook or at our soundcloud account.

Intro/Outro music is by Lee Rosevere via fma.org

Join in the discussion!

Yes, as viewers we all root for Clark and Leah because they’re the protagonists of the TV series. But have you ever thought why the other characters in the OTWOL universe care so much about their relationship? Like why do the tenement peeps help Leah and Clark out so much? Well there’s one detail I’ve noticed that may point out why:

Aside from Bebeng and her husband, Clark and Leah are the only couple that have a stable and live relationship.

Don’t believe me? Let’s go through the relationships of the other characters of the show:

And if we do some basic number crunching we get this:

We can see here that the OTWOL universe is far from having a world full of working romantic relationships. More than 80% of the relationships are either dead, broken or not even present. Maybe that’s why it’s hard for me to really consider On The Wings Of Love as your standard romantic teleserye, because aside from Clark and Leah, romance is pretty much absent in the show universe.

WHERE DOES CLARK AND LEAH COME IN?

Show viewers want Clark and Leah to work because, because they’re the main couple and they’re played by a loveteam. Moreover, some would also want a reminder that love still exists. The same thing also applies to the characters of the show, in a universe full of broken and failed relationships, they also want to be reminded that love exists.

Especially when you consider how Clark and Leah while growing-up, didn’t have role models on how to maintain a romantic relationship. Clark’s parents were absent or died. In Leah’s case, Tatang and Nanang were separated, as well as, Tiffany and Adrian. It’s amazing how they’re still pulling through.

This makes me understand why the people of tenement uno would go through great lengths in helping out the couple (and also Tiffany and Tolayts!). Clark and Leah aren’t just neighbors to them, Clark and Leah symbolize some form of hope to them and to the other characters.

I don’t know if this was intentional but this again supports why I praise OTWOL’s writers’ room so much. Good job!

So we present the All About OTWOL Podcast, a weekly, 15-min podcast dedicated to On The Wings Of Love.

Expect the in-depth analysis Pop Philtre is known for but in audio format! So you can listen to it while commuting, driving, washing the dishes or what not!

For the pilot episode, Nenz and Euge breakdown the details of the most talked about San Francisco teasers.

Since this is a show dedicated to discussion, we’d like to hear from you! If you have any comments, suggestions, topics or questions you want us to discuss, just write ’em down in the comment box below.

(Edit: I added my thoughts on the possible direction OTWOL will take based on the previews they’ve teased during last night’s episode [episode 120])

With the introduction of Paulo Avelino as Sir Simon aka “Mr. Hitler” on On The Wings Of Love, it seems that the writers are setting-up a possible third-party to go in-between the already solid relationship of Clark and Leah. And they have not been subtle with this idea, giving hints in episodes that Simon will eventually form some kind of affection towards Leah. With the proliferation and oversaturation of kabitseryes not so long ago, some people are understandably not chill with this idea. At a character standpoint, is it inevitable that Leah will also develop feelings for Simon? Let’s try to figure this out by examining her current men, Jigs and Clark. Similarities between the two may point out what Leah looks for in her man that could help in understanding her set-up with Simon. But before that, let’s establish first what we know about Leah.

WHAT WE KNOW ABOUT LEAH

So we know that she’s determined and family-oriented. She went out of her way to pursue a visa and work in the United States just so she can send money to her family.  We also know that she’s generally a warm and caring person to everyone, hence she’s well-loved at Tenement 1.

When she arrived back in the Philippines and got a job as a copywriter, we saw that she’s also career-driven, willing to pour in the hours and tolerate Simon’s strictness to create the best ideas for her firm.

WHAT WE KNOW ABOUT HER MEN

So how do these traits affect her type? Let’s see how Jigs and Clark stack-up:

We can see some similarities between Jigs and Clark:

So let’s add Simon to the picture. Let’s see if these things still ring true:

In general, it seems that Leah’s new man is always more successful than the last. Clark’s more successful than Jigs while Simon’s more successful than Clark. And it’s funny how the last man can always sense that Leah’s unconsciously crushing on a new guy. I’d guess that Jigs was insecure of Clark because Clark was a better version of Jigs.  Clark already lived and worked in America plus he got to spend time with Tita Jack, Jigs’s mom. Clark’s currently insecure of Simon, because Simon’s a better version Clark. Clark feels he could also have been like Simon if his parents didn’t leave him and had the same educational opportunities as Simon had. He knows if he had the same opportunities and upbringing, he and Leah could have been better fit.

So yes, at a character level, it makes sense that Leah will develop feelings for Simon. It’s not just some absurd ploy by the writers to introduce a third-party to extend the story. If Thursday’s preview was any indication, Leah just realized that she might have more than just professional admiration towards Simon.

(Does this make Leah tanga or kereng-keng? Not really. This makes her character more believable and human. It’s normal for you to admire someone other than your partner. It’s harmless unless you reciprocate.)

VALID BUT IT DOESN’T MAKE SENSE

Even though this is the very first piece I’ve written about OTWOL, I’ve admired the show’s writers’ room for a long time. They have been more progressive in handling OTWOL’s story compared to its contemporaries. I won’t drop names, gerahin pa ako. But here’s a list of things that they’ve done better than other teleseryes:

Now after establishing these points, I find it hard to believe that they’ll anchor the current Clark and Leah story arc to a third-party issue.It just doesn’t fit this progressive direction OTWOL has in storytelling; especially when they had already used it to develop the Clark and Leah pairing at the start of the series. Do remember that Clark was the third-party between Leah and Jigs. Moreover, the show has already explored the possible effects and fallout from this kind of set-up (remember that episode when Jigs cried?). What else do we need to explore?

Yes, I know that in the end it will still be Clark and Leah. However, if they’re planning to break-off their most awaited church wedding just because ABS-CBN asked for more episodes and Paulo Avelino needed a new project, then they’re betraying the story and series that they’ve presented and developed. And at a story level, breaking-off the wedding because of an unwanted guest betrays the growth that Clark and Leah’s relationship has already gone through.

I don’t know who suggested this detour in storytelling but an intensified Simon-Leah pairing could possibly be detrimental to the brand and to the caliber of storytelling they’ve already reached.

The writers don’t need to break-off the wedding if the point of introducing Simon is to prove that Clark and Leah’s love will prevail forever and ever. I know I’m not in the position to suggest what the writers should do, but I’m just a concerned fan as any. So here’s a possible story flow:

SAN FRANCISCO PREVIEW REACTION: DO WE REALLY NEED CLARK AND LEAH TO BREAK-UP?

No. I know it adds nostalgia because they’re going back to where they first met and an additional layer of romanticism because of the “pagkahaba-haba man ng prusisyon, sa simbahan pa rin ang tuloy” saying. But my question here is, at a story and character standpoint, DO CLARK AND LEAH NEED TO BREAK UP? I don’t know how it has come to this. Is it because of pressure from the execs to extended the story? I’ve already expressed my reverence to the writers in this piece, that I cannot believe that this is the ending they wanted. It just doesn’t make sense. TANAW NA NATIN YUNG SIMBAHAN, BAKIT KAILANGANG LUMIKO PA?

We don’t know the reason why they’ll break-up but here are possible guesses and my arguments why each guess doesn’t hold up.

FUN FACT: 120 episodes na ang OTWOL as of Jan 22. If you watched all episodes, you’ve spent 60hrs watching the series. With that much time invested as a viewer watching Clark and Leah form their relationship, do you still want them to have that break-up?